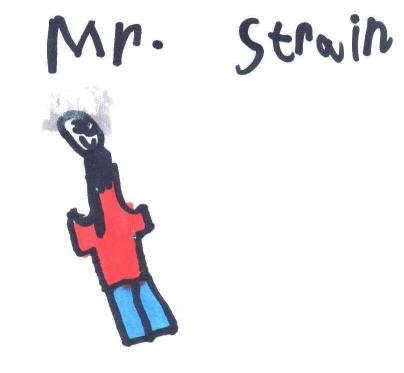 Some time ago I was given as a Christmas present...no, you didn’t misunderstand. I was GIVEN as a Christmas present to Betsy. As I remember it, I was promised to Betsy when she was five years old by her Grandfather who along with her Grandmother go to church with us. Betsy loves to draw and color and for that Christmas was promised a session with a REAL artist. Her grandfather asked my wife Sherry about this and Sherry said I would love to do it but forgot to tell me about it, so when the time came for me to be the artist for Betsy I was taken a little by surprise and moved into adrenalin overdrive and pulled off a two and half hour session with Betsy, monitored by grandfather, grandmother and Sherry. This all happened on a Sunday afternoon.

I gathered together a lot of old art supplies and paper and let the afternoon alternate between showing Betsy how I did certain effects with watercolor and then letting Betsy try it for herself. Betsy was a quick learner and seemed genuinely intrigued by everything that was happening. I probably went a little beyond Betsy’s age as I pontificated on about the various rules and regulations of art. At one point I was showing Betsy how you could divide the paper into six equal parts by drawing straight lines horizontally and perpendicularly on the paper and pointing out that where the lines crossed were good places to place the “center of interest” of the picture. Betsy looked on with a blank expression as I presented this jewel of art intelligence. This was something I had learned in college when design was called composition and artists were secure in their belief that the rules mattered. Betsy looked on with a benign expression and when I had finished, I saw it coming, but I didn’t have time to duck.

I knew what Betsy was going to say before she ever said it, “If you do a nice drawing, you can put it anywhere on the paper you want it”. I was stunned by the genius of her observation. Betsy had taken the conversation from the art theory days of the 1930s and transcended all the modern movements in art to arrive at approximately the art truth for the twenty-first century.

It’s true, wherever you place an object on the paper, you will respond in such a way as to make that a part of your observation of that object. For example, if you place a house low in the picture you will usually be telling of the house in relationship to the sky; if you place it high on the paper you will be telling about the house in relationship to the land. Any placement at all is indicative of some meaning. I am grateful to Betsy for setting me straight on this matter and once again it has been proved to me that in the field of art we learn more from children than we teach them