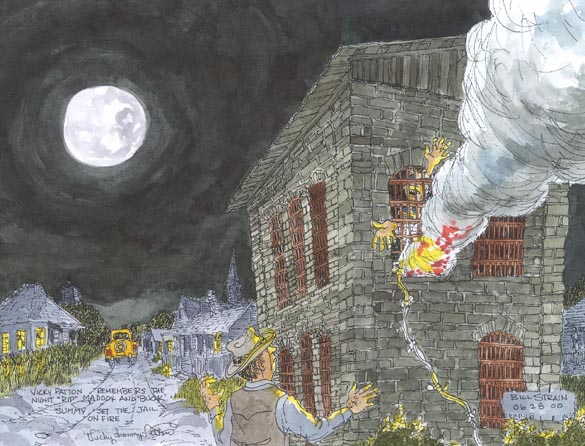 Do You Remember Where You Were the Night Rip Maddox and Buck Summy Set the Jail on Fire?

Vicky Patton remembers this piece of Central Texas history well because Buck Summy is her father and she has heard the story all her life. Now you may think you're hearing the same story about Vern Crider smuggling the beer and James Ealy Johnson setting the jail on fire, but you can be assured these are two separate events, both of which will be covered in our lifetime. Some may ask "why cover both stories when they are so similar?" and of course,the answer is found in the question, "would a historian leave out World War II in a history book just because World War I had been covered?" I think not.

This probably happened during the fall or winter of 1934 when both Cecil (Rip) Maddox and Bucky Summy were seventeen year olds. Sheriff King Casparis believed and had reason to believe that he had probable cause to arrest Rip Maddox for public intoxication. He instructed Rip to walk ten paces in a straight line, turn and then place his right index finger on the tip of his nose. Rip immediately responded by laying flat on his back on the ground with his palms up. Rip believed this would indicate to Sheriff Casparis that he was able to lay on the ground without holding on and thereby, once and for all, settle the matter of his sobriety. Sheriff Caspars was not amused and Rip was arrested and placed in the upstairs northwest cell of the Blanco County jail. This created a medical problem.

Rip Maddox found himself in the final stages of the second worse medical trauma a young man can experience--CERVESUS CONSUMPTUS INTERRUPTIS. Being fully aware of the high mortality rate of sufferers of this malady, Rip sought out his true friend and co-drinker, Buck Summy, to come to his rescue. Rip broke out the northwest window of the upstairs jail cell with a broom or mop handle (history has not determined for a certainty which) and tore his sheets into strips which he tied together to make a rope which he lowered to Buck on the ground below. Before Buck was able to tie the beers to the cotton rope for Rip to recover, Sheriff Casparis appeared on the scene and again, unamused, arrested Buck. And just to prove that he,Sheriff King Casparis, indeed had a sense of humor, he placed Buck Summy in the same cell with Cecil (Rip) Maddox. There are only two cures for CERVESUS CONSUMPTUS INTERRUPTIS and we see here the first cure has been thwarted by the ever-alert eyes of the criminal justice system, circa 1934.

The night was just too long and too cold and too depressing and our protagonists were beginning to shiver and mumble to themselves when Rip found a book of matches. Viola! We are saved! A fire was built and our heroes began to drift into a fitful sleep when they were awakened by their own coughing and realized that their cell was full of smoke and they could see the flames coming from the mattress. Strangely the physical constraints of CERVESUS CONSUMPTUS INTERRUPTIS seemed to be diminishing. Sheriff King Casparis was not amused as the fire was beaten out and the ruined mattress was thrown under a running shower.

Our story ends as the second only known cure for CERVESUS CONSUMPTUS INTERRUPTIS begins to kick in. Oxygen deprivation therapy, followed by fitful sleep therapy, followed by magistration therapy and finally fine-paying therapy and our chess players of life find themselves walking out into a new life, poorer but wiser. Vernon Crider expressed the "wiser" part this way, "when I see the law coming, I go the other way." Authority on the matter, Nelson Withers, had this to say about whether there was more than one incident of this nature in Blanco County in 1934. "Back then they used to set the jail on fire a couple of times a month."