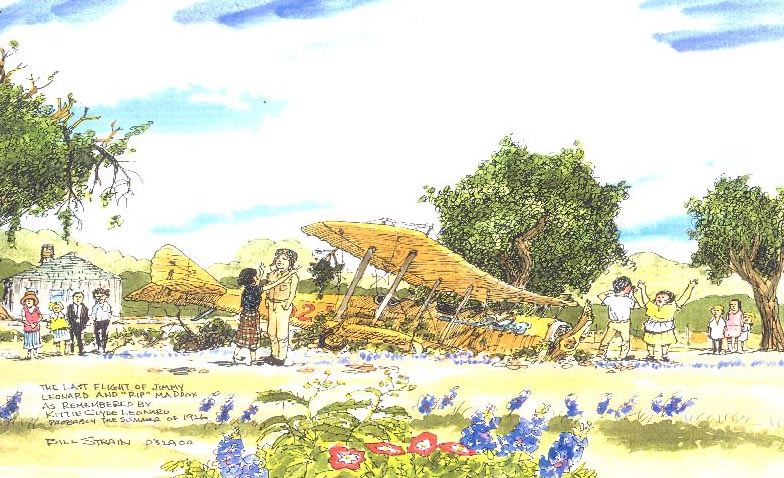 The Last Flight of Jimmy Leonard and Rip Maddox

Several Johnson City lifers mentioned to me that Kittie Clyde Leonard met her husband, Jimmy Leonard, when he crashed his airplane in the field where the Johnson family cemetery is located. Kittie Clyde says they met at a party in Austin while she was enrolled at UT and that Jimmy flew over from Austin to visit. Kittie Clyde says the plane was an "Old Standard". Someone verified that the Jenny JN-4 was called an Old Standard.

There were those who believed Jimmy was a military flyer, but his age doesn't indicate that he flew during World War I. Jimmy probably learned to fly from some of the returning military flyers and purchased his plane during the Post World War I barnstorming days

James Ross, Jimmy's son, has a detailed memory of the crash because he heard the story so many times while he was growing up and while the specifics were still fresh on the participants minds.

According to James Ross, his dad had flown from Austin to visit his mother and was giving rides to local rubber-neckers who were on the landing field (vacant lot). One observer said he was actually charging two bucks a ride. At the time of the historical event, his passenger was a local named Cecil "Rip" Maddox, who being a very gregarious soul, was waving frantically to the crowd on the ground.

Evidently Jimmy got caught up in the fervor of the moment, says James Ross and kept his eyes on the crowd just a flicker too long, because when he looked up there was a tree-top right in front of him. No one remembers exactly what two or three words Jimmy might have uttered at this moment, but there is absolutely no doubt about the occurrences of the next few minutes.

Kittie Clyde says there was extensive damage to the propeller, landing gear and a wing. Before they were married Jimmy promised Kittie Clyde he would not fly anymore and sold his "Old Standard". "Rip" was not so lucky for a couple of reasons; his lip was swollen to about double its normal size and his wife lived next to the lot where Jimmy crashed the jenny. Ruby had quite a bit to say to Rip that day, probably having to do with doing crazy dangerous things and wondering who would be around to support the family if something happened to him.

Kittie Clyde allows that she never, never, ever flew with Jimmy, before or after the fateful day. Vicky Patton, at the bank, had this comment to make, "you ain't heard nothing yet; let me tell you about the time Rip Maddox and my dad, Buck Summy set the jail on fire (but that's another story). Kittie Clyde says she and Jimmy married in 1927, so this must have happened during the spring of 1925.

For those of you just coming into town from Outer Mongolia, Kittie Clyde Ross Leonard was the Superintendent of schools in Johnson City for a number of years, and if she had discovered a cure for the common cold, she would still be remembered as LBJ's high school sweetheart, in fact she and Jimmy flew on Air Force One to the LBJ Inauguration.

The world has been a better place to live since Jimmy Leonard and Cecil "Rip" Maddox took their last flight.