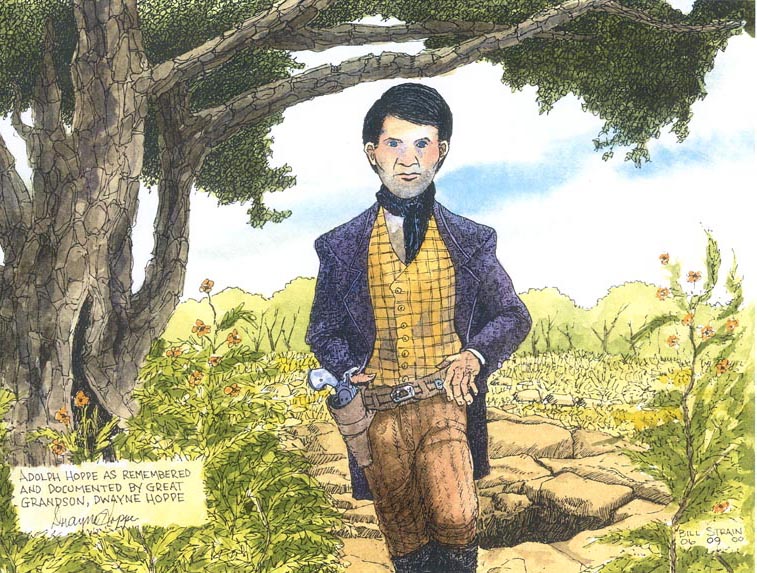 May 23, 1999 at 2:00 PM Ona Lou Roper presented Burnet County commissioners with a deed to 6.5 acres that includes a well-like cavern known as Dead Man's Hole. Dwayne Hoppe, great grandson of Adolph Hoppe says his family remembers it as the place where grandfather is buried. Hoppe family tradition holds that Adolph was a pacifist who was not sympathetic to secession from the Union and one day in 1863 a Texas Ranger came with several men and took a field hand into custody for evasion of Confederate conscription. Several days later the men returned without the Texas Ranger and seized Mr. Hoppe.

Hans Adolph Hoppe was born in Hamburg, Hannover, Germany in 1820. He made a pact with his best friend, Adolph Pompee, that if either of them died the other would take care of his widow for life. Adolph Pompee died and in 1847 Adolph Hoppe married Emilie Pompee and with his new wife and her one year old son set out for a new life in Texas. The Hoppes arrived in Texas in 1848.

In 1861 when a vote was taken, Adolph voted to remain in the Union. In Blanco County 86 votes were cast for secession and 170 against; Burnet County voted 248 to 159 to remain in the United States. 42 year old Adolph married 21 year old Sophia Julia Schroeter November 4, l862. As an immigrant, Adolph took his oath of allegiance to the United States as seriously as he had taken his pledge to Adolph Pompee and his vows to Emilie and Julia.

Based on his beliefs, Adolph helped a field hand evade the Confederate conscription and this made him the target for zealots known as "Fire Eaters" who considered the murder of enemies of the South to be a heroic action.

One day in 1863 Adolph left home in the wagon and was never seen alive again. Theodora said her father's wagon was found at Dead Man's Hole near Marble Falls. In times that were already hard and plagued with shortages of all kinds, the young widow, her son and four step-children were devastated. In 1867 Julia married George Stolley, a teacher at Cypress Mill.

After the Civil War, Adolph's body was recovered from the Hole along with others. Great grandson, E.G. Fuchs of Crosby, says Adolph is buried in the Burnet Cemetery. Dwayne Hoppe, a great-grandson from Johnson City says the bones were recovered and placed on exhibit at the Burnet County Courthouse, from there they disappeared.

A mystery has always clouded the death of Adolph. No suspects were ever named. Dwayne's family has always believed their great grandfather was hanged from the oak tree which grew over the Hole and then cut down to fall the 155 feet to the bottom. Great grandson, Walter Richter of Austin, says Adolph was shot and thrown into the Hole. We will never know in this life.