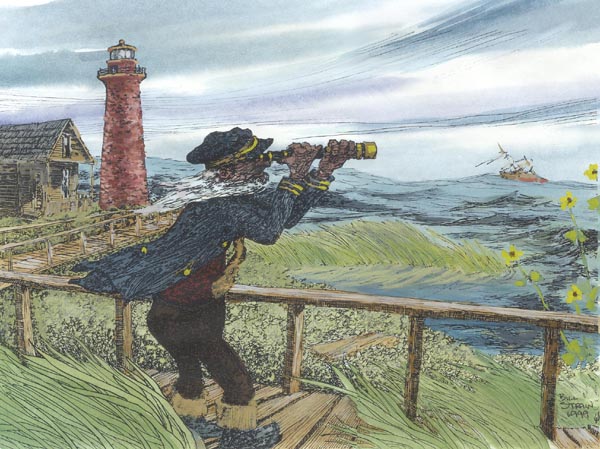 A Lighthouse to Cherish and Remember

You might ask how a lighthouse in Port Aransas, Texas could have any connection whatever with the Texas Hill Country and Central Texas. Bear with me. The lighthouse dates back to before the Civil War and I understand was fired on by a Union gunboat during that so called civil conflict. Mifflin Dove is the great grandson or great grand nephew or something of the depicted lighthouse keeper and provided me with an old photo of his ancestor as a point of departure for this drawing. I started the drawing around 1968 and then got interested in police composite drawing and didn't finish it until 1999. That's got to be some kind of endurance record. This however establishes no connection to Central Texas.  Bear with me.

The story about the gunboat firing on the lighthouse is a good historical story and maybe Mifflin will want to write that up someday, but what I want to tell you about is a piece of history that needs be preserved and is in dire danger of being lost, forgotten or suppressed. I've only met Charles Butt one time. That was at the Briner Paint Mfg. Co. factory during the 1970's when the lighthouse was being coated with marine protective coatings, but I have heard a lot about "Charlie" Butt and of course growing up in Corpus Christi, I've watched the H.E.B. Co.. thrive while in commercial battle with such names as Guy, Biel, Skaggs, Albertson's, Gibsons KMart, Walmart and Piggly Wiggly. The Company has always provided quality goods at a fair price and that since the beginning a very long time ago (end of commercial).

I spent one weekend at the lighthouse as the guest of a guest and it was that guest who shared with me the following narrative. I don't know if it's true or not, but if your version isn't an improvement over mine, don't call me.

It seems that Charles Butt was at a social function in Corpus Christi (social function is material to establishing mode of dress) and a number of guests were talking about the lighthouse and several wanted to see it and after much insistence the group piled into cars and proceeded to Port Aransas. While this was happening the weather turned foul and winds bearing sheets of rain began whipping across the land and water. Finally the group arrived in Port Aransas, transferred from cars to a motor launch that would take them to the lighthouse. The lighthouse is accessible only by boat.

A number of yards from the lighthouse pier, wet, cold and tired, the guests were dismayed to hear the engine on the launch sputter and die. Charlie Butt, according to the story, jumped into the water up to his neck and with the mooring line pulled the launch the remaining yards to the dock. Cold, wet, tired , the group floundered their way to the guest cabin and upon entering and turning on the lights saw that the area inside was utterly trashed with half eaten sandwiches, parts of apples, empty wrappers, pop bottles, cans and that all the grocery bags lying around had the distinct markings of HANDY ANDY printed on them.

In the hushed silence that followed, history does not record what was said or done at that moment in time. And so, there you have it, another piece of history fresh from the beautiful Texas Hill Country.