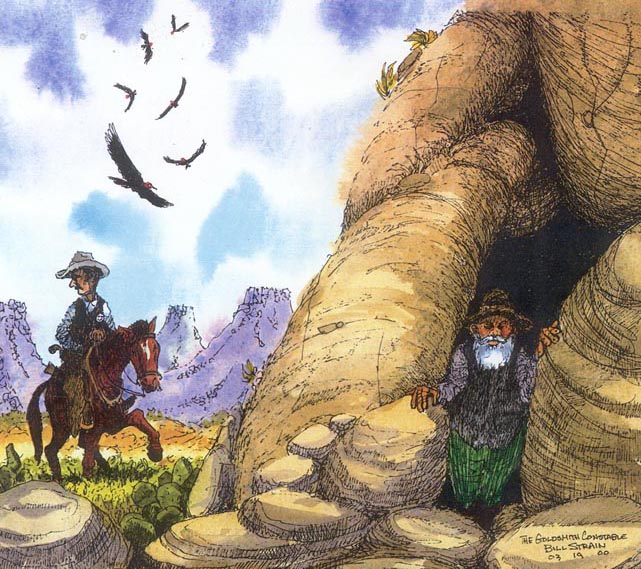 Time passes, the trail of Constable Pogue is growing cold and still no word from Amy. Joy says it wasn't Goldthwaite it was one of those other county seats with a gold name.

Late night comes, sleep doesn't. The creative juices are flowing and still no word from Amy. A quick look at the Texas Highway Map and there it is, the only other gold town in Texas--Goldsmith in far West Texas. OH BOY!. That's got to be it. Studying the old tintype carefully the sketch begins showing Constable Pogue hot on the trail of a West Texas fugitive. Originally the man-hunter in this composition was supposed to be a certain Police Chief in San Marcos, but that's another story. The features of Constable Pogue are assembled in the composition and the features of another well known member of the First United Methodist Church of Johnson City, Texas are provided for the fugitive and VIOLA! it is done.

Next day Joy says for sure Constable Pogue operated out of Gholson, Texas, a small town near Waco from where he would serve warrants and then transport prisoners to the county seat.

HEY! WHAT! DON'T LOOK AT ME LIKE THAT! This is the way history gets itself written and we're still waiting to hear from Amy.