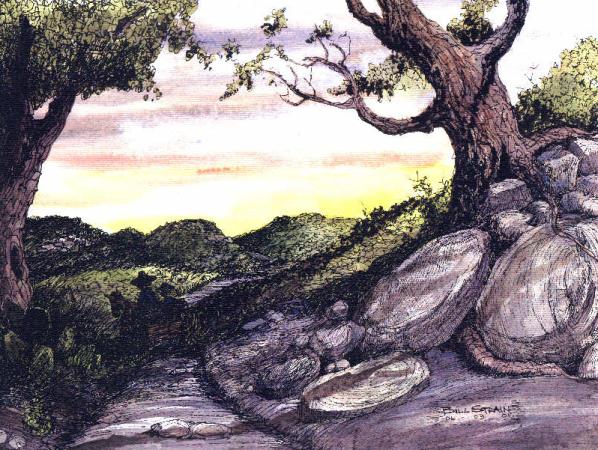 The Summy's of Blanco (you'll perhaps remember that it was Buck Summy who helped "Rip" Maddox set the Blanco County Jail on fire) confirm that Uncle George was very much into "one-upmanship"; if you got 3 inches of rain last night, Uncle George got 3.5 inches. Uncle George for all of his adult life always got a half inch more rain than whoever he was talking to at the time. Joe Summy can remember no exceptions to this rule. Uncle George also told someone that he was six years old when he made his first cattle drive with his dad from Bell County to Blanco County. That was probably when the Corleys moved from Bell County to Blanco County. This probably had something to do with Uncle George's size. Dorothy will smile, maybe even laugh a little and then tell you that Uncle George was a really small man. Although small of stature Uncle George had the will of a Napoleon and seldom backed down to anyone. There was one news making exception.

It was that Napoleon complex that earned Uncle George a feature story in the Ft. Worth Star-Telegram on Nov. 9, 1966. This is the story that Dorothy cannot tell without laughing out loud. The scene is election day 1966 in front of the Pedernales Electric Coop building where Uncle George is the Election Judge for the precinct where President Lyndon Baines Johnson will shortly be on hand to cast his vote. In Blanco County the polls open at 8:00 am and at 7:00am Uncle George pulled up in front of the building in his battered pickup truck only to be told by the Secret Service men on hand that he will have to move his truck because the President's car will be arriving momentarily for President Johnson and Mrs. Johnson to cast their vote. Uncle George told the Secret Service men in no uncertain terms that HE was the Election Judge in this precinct and that he was in charge of this polling place. Sleepy-eyed reporters began to come awake as they determined by Uncle George's demeanor that a possible confrontation was in the making between the Election Judge and the President of the United States of America. Uncle George was warmed by the attention of the reporters and declared that the polls in this precinct would open at 8:00 am at which time the President and First Lady would be permitted to vote. Uncle George let the reporters know that he was no "rookie" where the President was concerned having know Lyndon when he was a boy, grew up with him, even knew his folks. Uncle George became an encyclopedia of information on the President's mischievous boyhood and early manhood but allowed he had always voted for Lyndon Johnson. Uncle George told the story of 1925 when Lyndon was a big old boy working on the highway to pay his way through school and was always wanting to "rassle". Uncle George laughed that he would have to let Lyndon "throw" him every now and then just to keep him in a good humor. At this point one of the reporters asked a Secret Service agent what would happen if the President and First Lady were not permitted to vote when the arrived. The Secret Service agent shuddered and shrugged his shoulders in the spirit of "we'll cross that bridge..." At 7:20am, unaware of the brewing confrontation, President Johnson and First Lady Johnson arrived to vote. The air, was as they say, "pregnant with silence" as the couple approached Uncle George who calmly handed them their ballots. Uncle George had once again "been thrown" by the President of the United States of America, Lyndon Baines Johnson. Uncle George went about his business the rest of the day as if nothing exciting at all had happened.

This was the story Dorothy Howe Dillon brought me around the end of October of they year 2000; but as we visited she continued to talk and another story came out that I thought was the best story I'd ever heard about anybody's Uncle George. Here is that story which I think will indicate that Uncle George came by his unusual ways quite honestly.

If Uncle George was six years old when they moved from Bell County to Blanco County then he must have been eight or ten years old when the following events took place. We don't know very much about Papa John except that he and Uncle George did a lot of things together. Working a farm or ranch around the turn of the last century was a constant struggle exacerbated by the soil and terrain conditions in Blanco County and to be successful a farmer-rancher had to take his profit where he found it. Unlike the proud ranchers of the big western spreads Blanco County ranchers had to deal in chickens, eggs, sheep, turkeys and in fact anything that would provide cash to a cash-hungry operation. Papa John's spread near Miller Creek was no exception. One of the happy differences between Bell County and Blanco County was the presence of a large city, Austin, Texas, only a little over thirty miles East.

Every few weeks Papa John and Little George would load the wagon down with anything and everything they could find that might sell to merchants in the big city of Austin, Texas. Being the Capital of the State of Texas, the economy in Austin was always good and the Grocery Stores, Hotels and Restaurants were always in the market for fresh produce, dairy products and meats of all kinds. Firewood was also a staple product. Loaded with whatever they could find and of course whatever the family could spare, Papa John and Little George would set out on the several days journey to the big lights and exciting commerce of the State Capital. Papa John took to commerce in a way that could have never been predicted, spurred by his natural joy in trading and the need for that ever elusive element of farming....CASH. In fact at some point in time Papa John quit thinking of himself as a farmer-rancher and although he probably never in his life heard the word, the filmy ectoplasm of meaning that we now call, "entrepreneurship" took over the substance of his life.

The journey by wagon to Austin was a long one and ideas and discussions had fertile soil in which to grow with the long miles of up and down trails. Occasionally a dead tree would provide an addition to the fire wood being carted or a deer would bring a good price in the kitchen of the major hotel in Austin. Several things began to catalyze in the marketing style of Papa John and Little George; they became good friends with the merchants with whom they traded and they became adept at determining what would bring a good price. The Hotels and Restaurants began to write their menus based on expectations of products to be received from Papa John and Little George. In fact at the most prominent Hotel in Austin, rabbit stew was a staple and was there because Papa John had become so proficient at providing that product to the kitchens of Austin. Rabbits were plentiful and didn't take as much time to dress as a deer and could be salted down more easily than larger animals in the warm months. In fact, after a few years of entrepreneurship, rabbits became Papa John and Little George's specialty. Both Corleys became excellent shots and while Papa John drove, Little George could be skinning, dressing and salting down the rabbit carcasses. Things just couldn't get any better for Papa John and Little George.

But that didn't mean they couldn't get worse. One year for whatever reason, there just weren't any rabbits. Maybe it was caused by a bumper crop of coyotes or maybe even rattlesnakes...there just weren't any rabbits. If that happened today, samples would be sent to Texas A&M Research Laboratory and the virus would be identified and duly dealt with, but this was turn of the century Central Texas and Papa John had to deal with this in the only way he knew how....Yankee Ingenuity! Or, more appropriate for time and place maybe....Confederate Ingenuity! The Hotel and Restaurant managers were grim faced. Their menus were becoming out of date. Their customers were complaining. People were saying that chicken stew just didn't have the nutritional benefits of rabbit stew. The clients in Austin let Papa John know that it was now time for action. Something had to be done. And so...Papa John and Little George went into action.

(Now folks, let me remind you pet lovers that this all happened almost a hundred years ago. Don't go clogging my Email up with animal rights literature. I'm just telling you the story the way it was told to me).

It had not escaped the astute mind of Papa John that a common house cat was about the same size as a rabbit, and after several sleepless nights Papa John, thanks to an excellent memory had just about placed in his mind every house cat between Miller Creek and Downtown Austin, Texas. Knowing that there might be a problem with Little George, Papa John explained it this way, "Now, Little George, you're just going to have to trust me on this one. They's been a heap of in-breeding here in Blanco County but thank the Good Lord who provided us this good market in Austin, I'm still able to identify the true rabbits in this county, so you just trust me, Little George, and we'll do alright...You understand what I'm telling you, Little George?"

For several weeks it seemed that the problem had been solved. The faces of Austin were again full of smiles, but the good times were short lived. On a memorable trip to the Capital, the smiles were missing. There was much hemming and hawing and finally a number of customers just out and asked Papa John what in the hell he had been selling them for rabbits. They were having complaints from customers. They were having to have new menus printed, leaving off the famous Travis County Rabbit Stew and there was even talk of suing and talking to lawyers. Papa John never admitted to providing anything but the real product, but did admit that the quality of the Blanco County rabbit had been somewhat below expectation this year. So an agreement of sorts was reached and Papa John would continue to provide produce for the clients, but it was duly demanded and agreed to....when the animals were skinned, one paw would be left on the carcass for certain identification.

Papa John never lived to achieve that status, "Friend to the President" as did Little George, but late at night as the two of them visit there at their resting place in Miller Creek Cemetery I've heard it said that you can hear them cackling with laugher as they remember a good story or how they got three and a half inches of rain while the Summys only got three.